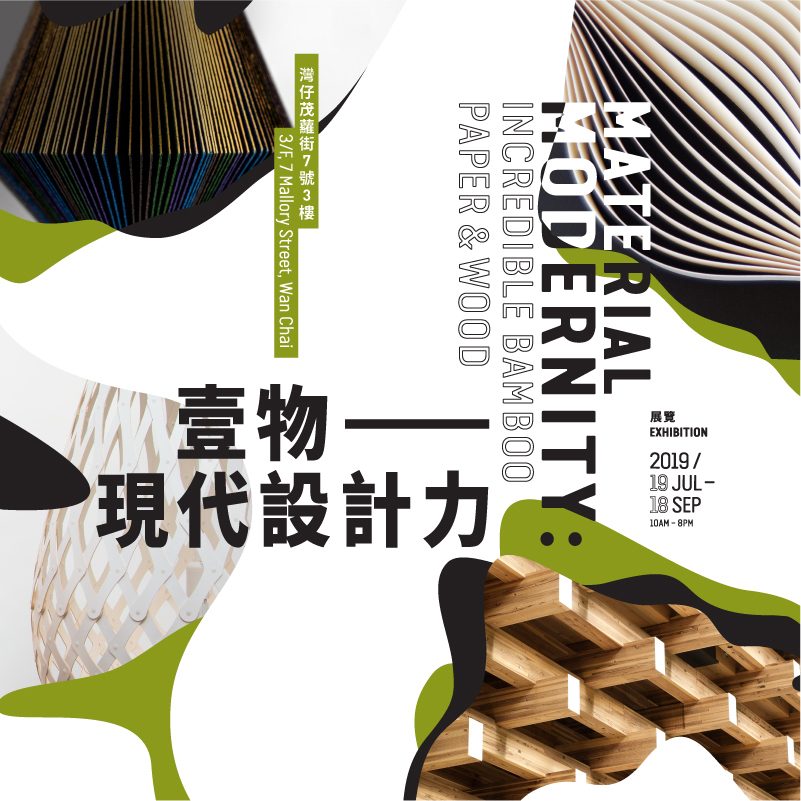 “MATERIAL MODERNITY: INCREDIBLE BAMBOO, PAPER & WOOD” is an extra-special project which looks at the visual culture and language of Asian design through material innovation. What really come through the bright explosive colours and styles are forward thinking and innovation in the materials we use. Bamboos and woods of many kinds are abundant in China, Japan, Thailand and Indonesia, and architects, as well as artists, craftsmen and designers, have always been taking full advantage of them. Bamboo is regarded as humble rather than perfect in many Asian countries, but the essence of modern Asian design is adaptive, collective, simple and detailed, with fine workmanship and a clearly expressed function. In Japan, wood and paper are often used in homes and creative spaces, for while wood adds warmth and vitality, paper adds friendliness and charm. Several countries have incorporated these characteristics in consumer items that range from household appliances to clothing, and festivals and cultural practices sustain the aesthetic interest and skills which then have an impact on design. All in all, Asian designers have made great use of these materials to appeal to and innovate traditional sensibilities.

The ninety projects on display in this exhibition span the continents, from Hong Kong to India, Indonesia, Japan, The Mainland, Myanmar, the Philippines, Korea, Taiwan and Thailand, and Italy, Israel, New Zealand, Spain, The Netherlands and United Kingdom. Many designs have travelled a long way. The most exciting thing to me about “Material Modernity” is that it enables us to become acquainted with designers of different cultures, who pursue a material improvement from traditional or subsistence lifestyles. Though the forces of globalisation often homogenise cultures, this exhibition shows that many designers nevertheless cling to their ethnic identities and cultural distinctiveness. Most importantly, we consider the influence of modernisation on the interplay between individuals and material change within a modernising society.

Amy Chow is an interdisciplinary design expert and connoisseur with achievements in multiple roles. Trained in multiple creative hubs like San Francisco, Los Angeles and Rome, Amy joined The Hong Kong Design Centre as Design and Project Director (2005-2012), overseeing the DFA Awards, research, professional training workshops and exhibitions. Over the last decade, she has spearheaded numerous critically acclaimed design exhibitions to the local and international audience, including Creative Hong Kong: Project 9707 (2007) which was seen in Vancouver, Milan, London, New York and Seoul, the six-month-long Creative Ecologies of Hong Kong: Business Living Creativity (2010) at the Shanghai World Expo, Creative Ecologies+ (2012) at The Hong Kong Heritage Museum, Imminent Domain: Designing the life of tomorrow (2013), at Asia Society Hong Kong Center and Confluence 20+ (2017), a monumental roving exhibition series which has travelled to Milan, Hong Kong, Seoul and Chicago. As an intellectual and academician, she has lectured in many design institutions and coordinated academic programs.

Despite the inroads made by modernization and Westernization, Asian craft, design and fine art continue to add a special dimension to people’s lives. No one can spend even a few days in Japan without being powerfully affected by the traditional culture that remains alive and well. There are few civilizations in which design and quality have played such a significant role in the day-to-day life of the people. Hong Kong design is different, suggesting aesthetic and ethnic kinship through the use of images and materials that are diverse in media and technique, whereas India, Indonesia, Thailand, Vietnam and other Asian countries use traditional techniques and natural materials. The philosophy and ethics of Asian design are revealed in different scales laden with cultural meaning.

Through curatorial research into the essence of Asian design and beauty, we identify and explain how various elements came to permeate the culture-based philosophies and traditions that have become an integral part of our lives. This themed series of exhibitions highlights specific perspectives on materials, aesthetics, lifestyles and design concepts, and is addressed to designers and enthusiasts who appreciate and care about fine design and quality of life.